As many of you will know, I recently had the privilege of travelling to Kalgoorlie for a week on outreach. I went with my ministry, Worship for the Nations (WFN for short) and Priceless, another ministry on base that focuses on issues of prostitution and human trafficking. Kalgoorlie is just under 600km (that’s roughly 370 miles for us Brits) away from Perth, so pretty comparable to the journey from my home in Somerset to my Granddad’s house up in Scotland. Except the road looks like this. 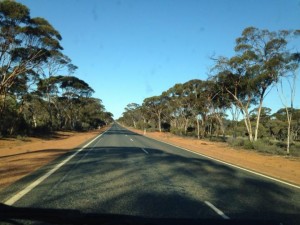 And not only that. This is the only road that you have to take. You drive on this road and this road only for 6-7 hours. And then you arrive. It’s pretty simple. I’m not very good at navigating, but I think even I could manage this journey without a SatNav. So that was my journey. Wide open spaces, beautiful Ozzie scenery, and red dirt. Lots and lots of red dirt. And maybe every couple of hours or so you will get to see some form of civilisation. Maybe a car will come by in the opposite direction. You might see a train or one of those really really big lorries that are even longer than they are big that you could only find in a country this size. And even less often, you will drive through a small town, with a population of a couple of thousand at the very tops, and a “servo” (aka petrol station/gas station/service station/something else entirely depending on where you are from in the world) which you will naturally stop at to refill your engine because it will be another couple of hundred km before you see another one. Such is life when you are in the Ozzie outback.

To give you an idea of how crazy desert like it is when you live in such a place – on our way back we stopped for lunch at a random picnic table on the side of the road. We pulled out our pre-packed lunch from the back of the van, and in the short amount of time that we were sat outside eating, our sandwiches turned to toasties as the heat/dryness in the air literally toasted our bread in our hands. I couldn’t believe my eyes. This is not the kind of  problem that a typical Brit faces when having a picnic! And then there is this. 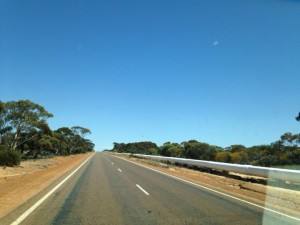 The white thing you can see on the right side of the road is a water pipe. A really long water pipe. It is in fact so long that it carries water from a reservoir just outside of Perth a whole 330 miles (530km) all the way to Kalgoorlie, so the 30,000 people living in this city can have access to water. That’s right. One of the biggest cities in the state of Western Australia has to have its water pumped 330 miles in order for them to be able to survive. That’s how “in the middle of nowhere” they actually are. That’s how much “in the desert” they are. They even have signs advertising fake grass companies. They do pretty good business out there. The house that we were living in was surrounded by it.

So lets stop for just a moment and put this into terms that we can understand. And when I say “we” I mean British people. Because really, every time I stop and think about this, it literally blows my mind. Maybe not literally. But I do stop and think how crazy big and vast and…well….empty the majority of this giant country is. Imagine that I live in Portsmouth in the UK in a parallel universe. The nearest city to me is Gretna Green. Yep that’s right. Gretna Green. And between my city and this city is 1 road that travels the full distance of this country that we call England. And on this one road there are roughly 5 petrol stations, maybe 6 or 7 main towns where people live, and the occasional tourist attraction where an earthquake once happened. Apart from that, all you will see on your estimated 7 hours of travelling is wide open spaces and the beauty of mother nature. Oh. And a water pipe. A really long water pipe that runs alongside this 1 road for the rest of your journey. This water pipe appears a few miles outside of Southampton (because in this parallel universe where there is only 1 road between the north and south of England it conveniently runs past this “small town”) and pumps water the rest of the way up to the Scottish border. Because those poor people in Gretna Green don’t have any water supply for themselves. And this is the closest place where they can get a reliable and permanent source. Yep – you’ve got it. A water pipe running almost the entire length of England in order to supply life saving essentials to our neighbours in the North. That is how teeny tiny, and completely disproportionately crammed full of people, our nation is in comparison to the land we call “Down Under”.

There is much more that I could say about my trip into the outback. But I will leave that for another time. Instead, I will leave you for now with the craziness that is the country, and continent, of Australia. The country that defies all logic.

2 thoughts on “Trip to Kalgoorlie and the Australian Outback”